Back in 2015 I embarked on a little experiment to see what it was like trying to transition to a completely plant based diet. What I found out was, it’s not that easy in a lot of ways. Animal products are so prevalent it’s really surprising how many foods you wouldn’t even expect to not be vegan-friendly that aren’t. Eating mostly raw, plant-based meals for a few months however was great to my stomach and even after the experiment ran its course, I ended up sticking with a mostly plant-based diet for around a year, year and a half or so… until that fateful day I fell off the wagon having a sausage biscuit with my dad. Yup, turns out just like any other addiction, once you relapse into eating meat and highly processed foods it’s really easy to stay off the wagon from then on. By the way, this article was inspired by the ethnobotanicals, medical herbs, premium spices and organic food vendor Eternally Herbal who I definitely would recommend!

Chapter 1: “What happens when a meat & dairy loving dude attempts to “go vegan” for 60 days?”

I mean how hard could it be, rite?

As soon as I wake up, early. Earlier than I had expected and two and a half hours before my first alarm (you know, the one you set to snooze the first 45 foggy minutes of the morning?) goes off. Even with the heady weight of early morning sleep fogging the ol’ gray matter, I am already beginning to doubt last night’s resolution. Maybe I was just up too late? Delirious from the past month’s work overload? Just an inevitable eventuality to the slow but steady increasing immersion into my (over a decade in the works) “all natural/herbal” kick?

Perhaps. And Perhaps a mixture of all those factors and inspiration owed to Paige, the resident vegan here at Eternally Herbal and my and Eternally Herbal new friend, vegan model, the lovely Dani Bre (who coincidentally I discovered, once again, through Paige here at EH).

Last night I had a steak. Tastiest steak I’d had all year, or a calendar year marked from yesterday. (Albeit one of two total steaks I’ve had in said calendar year). Fitting send off, I suppose before I begin this adventure. I can’t help but be reminded of the zen koan about the two Buddhist monks traveling. A woman is standing at a bank unable to cross, one monk lifts her up and carries her across the river despite the religious injunction against any contact with members of the opposite sex.

The next day, the other zazen practitioner looks at his companion, puzzled and upset:
“I still cannot believe you broke our oath by touching that woman, even going so far as to hold her, carry her across that wide and treacherous stream.”

“I left her there at the other side, my brother. It is you now, who carry her still, in your mind.”
Chew on that as I consider how I still carry that steak in my mind’s belly…

This won’t be too bad though, I’m thinking (bright and bushy-tailed now, after a shower). I’ll start with my usual anyway, the veggie sub at Subway next door to the Inn I’m currently posted up at. Drat, they’re still closed. I thought they served breakfast. How can you serve breakfast and not open before 8? Ok, ok, that’s fine, we’ll have one last send off then. A sausage and egg burrito (as non-vegan as it gets without bacon involved, gang) is my (gulp) final non-vegan meal of the day.
At least they’ve got that tasty veggie burger here at Burger King I can… Wait, you’re telling me Morningstar uses milk and dairy products in their veggie burger? This is going to be a challenge. I like Morningstar, personally prefer them to Boca, but maybe that’s just cause the first veggie patty I loved was the black bean and corn burger from MS, but does this mean even a lot of vegetarian products are taboo when you go the whole vegan? Guess so. Well, good thing I’ve got a handful of friends who’ve already gone vegan to refer to with advice. Not to mention a whole mess of nice vegetable proteins, seeds and smoothie mixers coming from Eternally Herbal soon…

Chapter 2: It’s not easy being vegan

It’s not easy being vegan…

It’s the little things. I’m becoming totally used to having to check “the instructions” as I’m beginning to call them,. the nutrition information, to make sure there’s no animal products or by-products in anything. But there’s so many in so much that you wouldn’t consider. No dairy products, I think. Ha, I’m fine without poultry or dairy. I’m not a huge fan of milk or chicken and it’s not like I eat eggs often.

Oh wait, you mean even if it just HAS eggs or milk in it it’s not allowed. This is where I notice that being strictly vegan is going to be a challenge. Vegetarian is easy. I’ve done that a time or twenty for a week or 40 at a time, but no ice cream, no cheese, no chocolate… Wait, they make vegan chocolate. Come to think of it, I’m more of a dark chocolate man than a milk chocolate fan anyway.

Then it hits me again, that it’s not only grilling season, but that I’m coming up on one of the most important grilling weekends in all of Summer. And me gone, vegan… Oh well, I’m beginning to become accustomed to guacamole instead of the veggie patty at Subway and avocados and bananas and nuts keep me grazing but full and there’s something refreshing about those vegetable burps. It almost feels like there’s so much freshness and nutrition it just has to burst out and announce itself.

It’s not until well into the third day that I experience my first temptation. I’m riding with my friends we’re in the drive-thru for Krystal’s, Tennessee’s version of White Castle, basically White Castle with more lard. The smell as we approach is nearly overpowering, but I’m remaining strong. I try to distract myself. I think about what a great scene this will be, my first major temptation and how I still stand strong. My friend orders a sack of 24 freshly steamed Krystals. They’re packed in this box that traps the steam and grease and beef and lard smell in and I’m still fine.

And then she rolls the windows up. I am engulfed with the smell of my favorite gut-bombs in all the world. Let me explain, I used to work at Krystal’s. I don’t know if it’s some secret in the lard that causes habituation to it (I’ve heard similar things about bacon, don’t laugh, it could be true!) but I found that when I worked there and ate there daily I would occasionally have a craving come over me and the more I ate them the more often the cravings would come.

So here I am, feeling trapped and trying to stay strong. I don’t say a word. Then as my friend is doling out burgers it hits her and she apologizes.

And so, it’s time for a quick snack since burgers are out of the way. I grab one of those gummy chewy candy things that have the “real fruit juice” in them that I convince myself are healthy when I want candy but won’t let myself. Oh boy, these things are great and they’re fruit and stuff, definitely could not have been made from any animals. But wait, “check the instructions first” I remind myself. Flip over the bag and read through the list, corn syrup, yuck, ok, ok, and… I knew it. Too good to be true, it’s chewy, it’s gummy, it’s HORSE HOOVES. Bahh, so no gelatin either, didn’t think that’d be a problem. I don’t like Jell-o, but anything gummy? Hmmmm, jujubes are ok. So at least I know one candy that’ll be safe next time I go to the movies.
Which begs the question, is movie theater popcorn butter really even considered butter? Guess will have to research that one too… Despite a few false starts at the beginning and a tense moment or two, so far this whole thing seems like it’s actually going to be ok. Must admit, there is a release of tension on the stomach and a bit more pep in my step. Thank goodness for the Eternally Herbal dried goji berries and dragonfruit. I’ll admit, the dragonfruit scared me at first, it’s dried flesh does resemble, more than a tiny tad, the scales of some mythical beast, but they taste great. I’m betting in a tropical trail mix with the right combination of nuts these would make a great tasting and super-healthy snack. 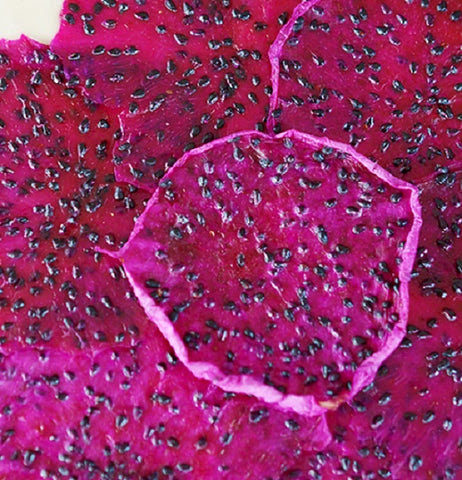 “It really does look like a dragon’s skin!”In between the new diet and plenty of items from Eternally Herbals Clean and Detoxify section, I’m anxious to see how this does feel after another full week or two. But Memorial day weekend is poking it’s head right around the corner. Best bet just may be to stay indoors the whole weekend and away from the wafting scents of barbecue and steaks and burgers and pork chops. We’ll see…